Have you ever been looking at your computer’s desktop and think it looks boring? Well, there are lots of desktop customization tools to make it more appealing. They all go about it in a different way but they range from fancy effects, organization, to changing the appearance of the Windows shell.

Fences has been around for a long time. It’s created by StarDock which has many other desktop customization tools. Fences allows you to organize your desktop icons in many ways. It can automatically organize your icons based on category. For example, all your web browsers will be grouped together and all your productivity software, such as Word, Excel, and Adobe reader will be in another group. Fences also has the ability to view a directory on your desktop. This allows you to have a folder permanently accessible on  your desktop for quick access. My favorite feature, however, is the ability to easily hide all your icons. This is set to a double click on the desktop by default. Don’t fret, another double click will bring them back.

Rainmeter is an open source desktop customization tool. There are tons of user made themes which include widgets to add to your desktop. You can mix and match widgets from different themes as well. Rainmeter can be thought of as a more feature rich version of the gadgets introduced in Windows Vista. Widgets have access to lots of system level APIs. These range from all sorts of things from how much storage is being utilized on a specific disk to the overall CPU usage. Many users have gone all out and rely solely on their Rainmeter widgets to navigate around the system. Some widgets mimic a taskbar and allow you to launch programs. My favorite type though is the music visualizers. These will react to the frequencies being produced by any audio source on your computer. They make the desktop feel alive.

Wallpaper Engine is another awesome tool. It’s on the game distribution platform called Steam. It allows you to create your own animated wallpapers that are graphically accelerated. Wallpaper Engine’s bread and butter is the ability to share your creations using the Steam Workshop. There are thousands of user created wallpapers to choose from. Many of which are animated as well. If you are all interested in 3D modeling, I highly recommended giving it a try and sharing your creations to the Steam Workshop for others to enjoy.

Lively is an open source alternative to Wallpaper Engine. It has many similar features including playing a video on your desktop. Lively is essentially putting a web browser behind your desktop allowing it to do neat things. One such thing is a fluid simulation. When you move your mouse on the desktop, a colorful display of ink dynamically interacts with itself and other fluids while also having lighting effects. It’s a neat trick. Anything you can make in a web browser can be used in Lively as well making it quite versatile.

Open Shell Menu is a fork of the popular Classic Shell program. These programs allowed you to choose a start menu from different versions of Windows. For instance, if you are on Windows 10, you could use Open Shell Menu to change the start menu to be more similar to the Windows 7 style. There are many styles available to choose from. You can even go back to a start menu reminiscent of Windows 95. Open Shell Menu also lets you customize file explorer. Most of the features they add are from the Windows 7 file explorer such as showing how a big the selected directory is in the status bar.

If you want something similar to Open Shell Menu but want official support for it Start10 is a great solution. Start10 is also made by StarDock. It has more themes out of the box compared to Open Shell Menu but it doesn’t let you create your own themes. You can have your start menu styled like Windows 10 but remote the tiles portion completely or even have the same layout of Windows 7 but styled like Windows 10 as well. It can even bring back the quick access feature.

There are many more desktop customization tools out there. These just scratch the surface. Tinkers have been trying to make Windows look the way they want for a long time now. One thing I used to do when I was young was make my Windows XP machine look like Windows 7. I thought the Aero glass was amazing. My computer could barely handle the customization tools and they were not super polished but it was fun none the less. I hope these desktop customization tools have sparked an interest in making your computer feel like yours while looking unique at the same time. 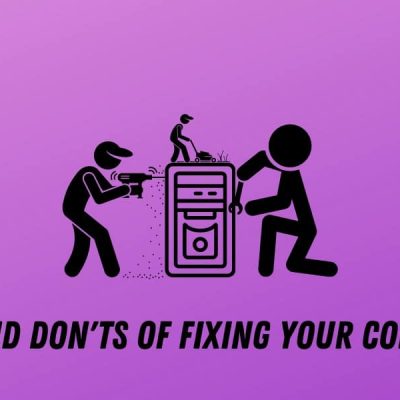 Dos and Don’ts of Fixing Your Computer

Canva: The Editing App You’ve Been Looking For

Give Your Browsers a Spring Cleaning